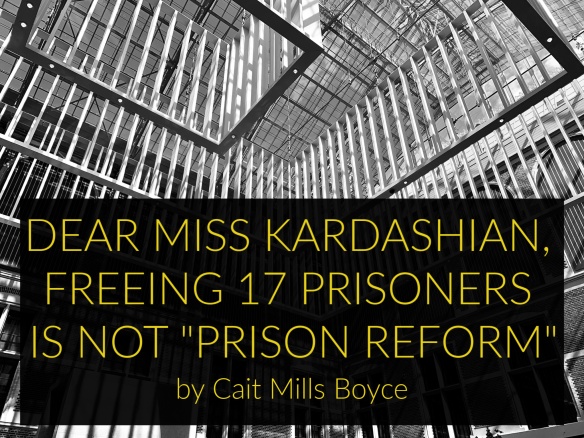 If you watch television, I’m sure many of you have seen the advertisements for the new Kim Kardashian documentary or you’ve read about her “freeing prisoners that, in her opinion, deserve to be free.”

While I applaud Ms. Kardashian for helping to set free 17 inmates, these inmates were low income, first time offenders and convicted of minor drug charges. Admirable, but no prison reform.

I have dedicated more than 40 years of my life to working with inmates both in and out of state and federal prisons. My work started small, being the liaison to inmates in county jail, helping them gain job and interview skills when they were released and working with them to replace identification cards, driver’s licenses, and Social Security identification. Many of these men had served lengthy sentences in some of the toughest California prisons from San Quentin to Folsom. This is not easy work. At times it is unsafe and at other times it is heartbreaking. I’ve lost inmates to suicide, mental illness, and parole violations. No, it is not easy work for any of us.

I am not alone in this endeavor. Attorneys who choose to stay with Legal Aid rather than forge a lucrative career; people who go into the prisons on a daily basis to bring relief, conversation, reading material, and companionship to inmates who will never again see the outside world; volunteers who send Christmas cards and letters to inmates; and even religious groups who hold services, counsel, and care about the prisoners inside make a difference in the judicial system with their compassion and their humanity.

Once I sat in the attorney/client room at a Minnesota prison with my client (and later husband) Christopher Boyce. I casually pointed out the nice young man who sat at the opposite end of the room, well dressed and clean shaven, speaking in soft words to his friend. Chris chuckled slightly and said, “That’s the guy who put his wife in the wood chipper.”

Another time, after spending many hours in a room with Charles Manson, I asked him about his prison time. “I belong here, I ain’t no good out there,” was his response.

Boyce and Manson were both right—some people just belong in prison.

But the United States needs to come to grips with its judicial system, its prisons, and its inmates.

In 1992, there were 1.3 million inmates in America’s prisons and jails. But two decades later, a million more had been added (Bureau of Justice Statistics). The majority of those—around 60 percent—are in state prisons, where most people who commit crimes end up. Only around 10 percent are in federal prisons, despite the attention those prisons receive. The rest are held in local jails. And that doesn’t include the millions more on probation and parole.

At the end of 2011, there were 2.2 million Americans incarcerated, 854,000 on parole, and almost 4 million on probation, meaning just under 7 million Americans—or one out of every 34 adults—were being supervised by the criminal justice system.

The linked article from the NBC News website is excellent and well worth the read. It focuses on the disparity of sentencing, the loss of hope, and the decline of the justice system.

It will take much more than the reality stars of this world to make the drastic changes and reforms that the judicial system needs to make. We need people who are committed to this work, who will be on the front lines next week, next month, and 40 years from now—even when the television cameras and microphones are silent. There are hundreds of us who are committed and who are here year after year.

So while I’m happy that Ms. Kardashian wants to travel my road, all I can really say is thanks, Kim, but stay in your lane.

Cait Boyce is the co-author of American Sons: The Untold Story of the Falcon and the Snowman, which documents her decades-long effort to free Cold War spies Christopher Boyce and Andrew Daulton Lee.